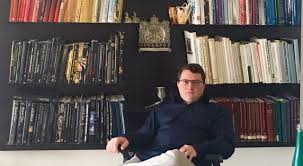 (YorkPedia Editorial):- London, Feb 24, 2020 (Issuewire.com) – In his research on the New Chronology of the ancient Jewish history, Israeli historian Michael Goldelman asserts that the recognized inconsistency between the traditional Biblical chronology and the available archaeological data can be resolved by moving the accepted dates of the Biblical events approximately 200 years forward. Changing the dating from the middle of the 10th century BC to the middle of the 8th century BC allows confirming the authenticity of the Biblical account of the Kingdom of David and Solomon.

For the last 15 years, Israeli historian Michael Goldelman conducts research into the ancient Jewish chronology reconciling the Bible, previous historic research and archaeology – and comes to some sensational conclusions.

“My research relates to a general concept of the Alternative Chronology of the ancient history of the Near Eastern civilizations proposed by the American scholar Immanuel Velikovsky, developed by the British historians, David Rohl and Emmet Sweeney, and combined with the results of the recent archaeological research promoted by Israel Finkelstein, professor of archaeology of Tel-Aviv University, who deals with analysis of the historical and archaeological reality behind the Biblical Books”, says Michael Goldelman.

“Professor Finkelstein questions the existence of the United Monarchy of David and Solomon traditionally set in the middle of the 10th century BC, pointing that there is no evidence to such a Kingdom’s existence in the contemporary sources and that Jerusalem, its capital, and the place of the Solomon’s Temple, did not exist as a city until the last third of the 8th century BC”, points Michael Goldelman.

“Although nothing is known of the Kingdom of Judea from the early period, the archaeological finds coming from the excavations of the fortresses located in Northern Israel, allow to confirm the existence of the Northern kingdom of Israel known in the neo-Assyrian sources as “the house of Omri”; it flourished from the early 9th century BC period and until around 733 BC when it was destroyed by the Assyrian King Tiglath Pileser. Thus, Prof. Finkelstein concludes that the time of prosperity during the United Monarchy of David and Solomon may be a mere fantasy of the later Judean chronicler writing in the Hellenistic period”.

“However, I challenge these conclusions suggesting that the authenticity of the historical realities behind the Biblical account of the Book of Samuel and the I Book of Kings can be confirmed if we accept that the original chronicles written on the Kings of Judea and these of Israel can be artificially brought within the same timeframe by the Hellenistic Jewish chronicler. Therefore, the chronology of the historical figures and the events described there and related to the kings of Judea belongs to the period of the second part of the 8th century BC which roughly corresponds to the time of the destruction of the Northern Kingdom of Israel”, continues Michael Goldelman.

“There are few archaeological finds that bring light to this issue. Firstly, many handles of the large pottery vessels with the inscription “lmlk” – “for a king” and the royal image of the Winged Sun discovered in the cities of Judea, such as Lachish and Jerusalem, dated to the last third of the 8th century BC – these are the evidence of the existence of the independent royal power in Judea at the time. There is, however, a smaller group of similar handles, with an inscription “lmlk Hbrn”, which confirms the position of King David as a ruler of Hebron before his conquest of Jerusalem; he was the only Jewish king of Hebron known to history.

Secondly, the Biblical account of I Kings relates to the exceptional figure of the Phoenician King of Tyre, Hiram, who was the closest ally of King Solomon, initiated a large-scale joint trading expedition across the Mediterranean and assisted Solomon in building the Temple of Jerusalem, supplying him with the building materials and the builders. The epigraphic evidence coming from Lebanon and Cyprus as well as the Assyrian inscriptions from the time of Tiglath-Pileser III, his contemporary, confirms the existence of this King of Tyre in the 730s BC and allow to demonstrate the scale of his vast trading and mining activities throughout the Eastern Mediterranean that allowed him to provide a generous economic support for the building activities of King Solomon in Jerusalem.

Thirdly, the radical re-dating proposed by Velikovsky for the chronology of the Eighteenth Dynasty of Egypt and the new timeframe set for the diplomatic activities of the Egyptian Queen Hatshepsut allows him to identify her as the Queen of Sheba, the visitor to King Solomon. Details of her visit to the “land of Punt” identified as Judea are depicted on the walls of her temple. Moreover, the British historian, David Rohl, proposed identification of the Biblical figure of Shishak, the Egyptian Pharaoh, with Ramesses II. This explains the correlation between the Biblical story of his suck of Jerusalem in the reign of Rehoboam, the son of Solomon, and the traces of devastation in Judea c.700 BC. “These fragmentary but authentic sources allow me to suggest the existence of the strong Judean Kingdom of David and Solomon centred in Jerusalem in the last quarter of the 8th century BC that flourished after the destruction of the Kingdom of Israel”, concludes historian Michael Goldelman.

The detailed arguments of Michael Goldelman can be studied in his paper “Outlines for a New Chronology of Ancient Jewish History”.