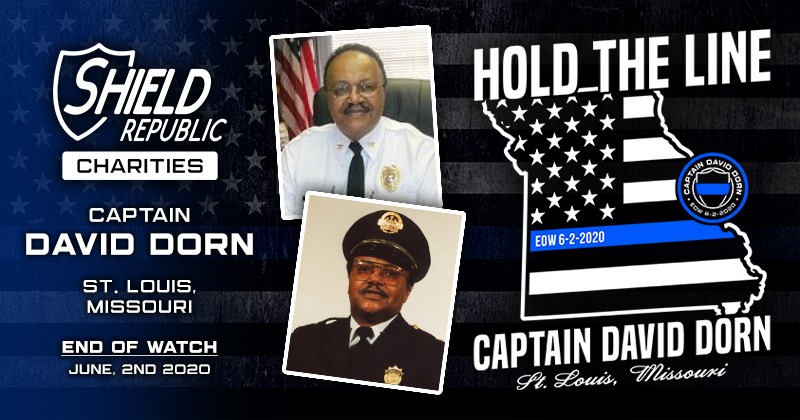 Captain David Dorn, 77, will be honored with ‘Hold the Line’ apparel fundraiser for his family

(YorkPedia Editorial):- Raleigh, Jun 6, 2020 (Issuewire.com) – A 77-year-old police captain killed during overnight riots in Saint Louis, Missouri will be remembered with a commemorative apparel fundraiser for his family.

Shield Republic Charities’ “Hold the Line” fundraiser will recognize the sacrifice of retired Captain David Dorn, who was murdered early on Tuesday, June 2 by looters outside Lee’s Pawn and Jewelry at 4123 Dr Martin Luther King Drive on the north side of Saint Louis. Officials said he was trying to protect his friend’s shop when looters shot him in the torso, robbed the pawn store, and left Captain Dorn for dead.

Captain Dorn served with the SLMPD for 38 years. He also served for five years as the chief of the Moline Acres Police Department in Saint Louis. He retired in the fall of 2007 after serving most recently with SLMPD’s patrol support division.

His wife Ann Marie Dorn is currently an SLMPD employee. She said her husband helped out at the pawnshop and was sometimes called upon by the owner to investigate when the pawnshop’s burglar alarms went off.

Shield Republic’s “Hold the Line” campaign honoring Captain Dorn will raise funds for his family through the sale of special apparel including t-shirts, long-sleeved shirts, hoodies, ladies’ tank tops, and decals. All net proceeds from the sale will be donated to the Dorn family.

“Though this is a terrible tragedy, we are inspired by the way Captain Dorn laid down his life even in his retirement, living up to the true calling of a first responder,” said Charlie Romero, spokesperson for Shield Republic. “Captain Dorn’s work to serve and protect after retiring represents everything we stand for at Shield Republic. We are honored to pay tribute to this man with our latest Hold the Line campaign.”

During early morning riots and violence across Saint Louis on June 2, four other officers were shot.

View the Hold the Line fundraiser page for Captain Dorn at https://www.shieldrepublic.com/products/100-donation-hold-the-line-police-captain-david-dorn.

Shield Republic’s Hold the Line fundraisers have donated more than $200,000 this year to the families and units of fallen first responders, police officers and K9 police dogs.

Established in 2016, Shield Republic is an American lifestyle brand based outside Raleigh, North Carolina. The company offers creative, fresh apparel and merchandise embodying American pride. Everything sold by Shield Republic is designed and manufactured in the United States. Shield Republic appeals to patriotic Americans passionate about personal strength, second amendment rights and military strength. Through Shield Republic Charities, the company shows appreciation to soldiers, first responders and their families.

Shield Republic
Shield Republic is a proud American lifestyle brand founded in 2016, outside Raleigh, NC. by Barrett Johnson and Ryan Carter. All of the apparel and merchandise is proudly designed and manufactured in the United States.
226 East Market St.