Skip to content
You are here
Government Health Science 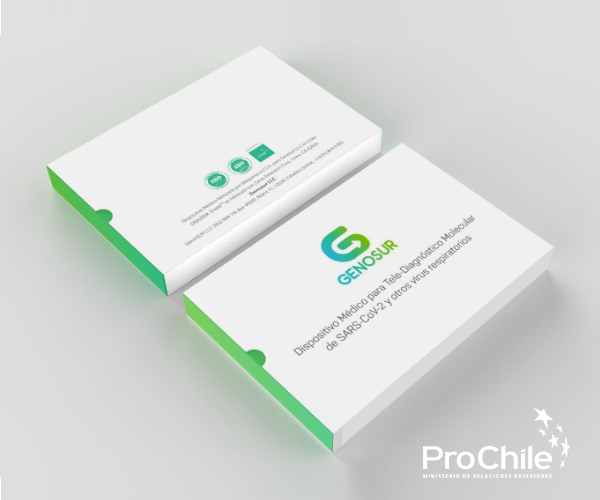 Since 2017, GenoSUR has been developing and manufacturing medical devices for molecular diagnostic applications in Santiago, Chile. Their devices allow for self and assisted sampling, depending on the application. During the global pandemic, GenoSUR found a way to pivot their business and develop a portable medical device/field sample collection kit for COVID-19, helping infected patients avoid emergency room visits. The test kit does not require cold storage and solved immediate critical testing issues countries were facing.

GenoSUR has supplied over 300,000 testing kits in the last few months to the Chilean Government. Chilean health authorities recognized the testing kit’s ability to save on several critical resources, preventing loss of samples by creating a focus of infection at sampling locations and reducing exposure of lab personnel; this created the first initial order of 1 million units from the Chilean Government. “We studied why South Korea and Italy were having such different outcomes in the number of infections and deaths. We concluded that the number of diagnoses had been a key part of the South Koreans’ successful campaign, and thus would be the main problem to be solved by any health system in the world,” said Matias Gutierrez, CEO and Co-Founder of GenoSUR.

Partnering with Chile’s Export Promotion Bureau through its trade office in Miami, ProChile Miami, and the Chilean economic development agency CORFO, GenoSUR expanded into Miami-Dade County from Santiago with the opening of a “soft landing” office at the Cambridge Innovation Center (CIC) Miami in September 2019. ProChile helped facilitate the connection between GenoSUR and 7HG and has continued to provide support and guidance to GenoSUR along with ASELA, an organization that promotes Latin entrepreneurship in Miami and is part of the largest network of entrepreneurs in Latin America. “GenoSur is a prime example of Chilean innovation that will have a positive impact on a global scale. Chilean entrepreneurs succeed because they look at the big picture. We have many forward-thinking companies in Chile like GenoSur, working to develop solutions for the most critical issues facing the world today,” says German Rocca, Trade Officer, ProChile Miami.

The 10,300 square-foot manufacturing facility is scheduled to open by July 4, 2020, in Doral, Florida, and will create 90 jobs within the first three years. 7HG will lead building and staffing operations with support from The Beacon Council Foundation’s Miami Community Ventures program. This nonprofit program, part of the One Community One Goal initiative, aims to provide low-income, structurally unemployed individuals with living wage jobs; GenoSur and 7HG have committed to making 90 jobs available to MCV candidates. The facility is expected to manufacture between 250K-300K testing kits per month.  “It has been an absolute pleasure working with the Miami-Dade Beacon Council. It is beyond inspiring to partner with an organization that prioritizes an effective focus on building through a holistic approach that connects the business community, government officials and most importantly the people of the community, to create a self-sufficient ecosystem of substantive and organic growth,” stated Lucius French, CEO and Founder of 7HG.

The Doral facility will primarily service demand for North America and five United States territories. It will also serve as additional support to offshore manufacturing for global demand.  Public health experts see prolific testing as a primary strategy in helping combat the spread of COVID-19.

Miami-Dade County Mayor Carlos Gimenez has been supportive of the project since its inception. “This joint venture will help Miami-Dade continue to ramp up COVID-19 testing and further safeguard the health of our 2.8 million residents as we adjust to our New Normal Guidelines and get people back to work,” said Mayor Gimenez. “I applaud GenoSUR and 7HG for their rapid launching of this facility in Doral which will not only provide much-needed testing kits but also create new jobs in our community.”

“Projects like this collaboration between GenoSUR and 7HG are important for us on many fronts,” explains Michal A. Finney, President and CEO of the Miami-Dade Beacon Council, the County’s official economic development organization. “We are able to leverage Miami-Dade’s connectivity as a Gateway to Latin America and its strengths in many relevant industry sectors – life sciences and healthcare, trade and logistics, international business, manufacturing – to set this venture up for success. This not only brings new jobs and investment into our community but, in this specific case, we also have the much-needed benefit of supporting the production of vital COVID-19 testing supplies.”

GenoSUR has been developing and manufacturing medical devices for molecular diagnostics applications since 2017. These devices allow self and assisted sampling, depending on the application.

GenoSUR prides itself by making things simple, the designs and components are meant to facilitate both sampling and transport. On the transportation side, the stabilization solutions, both proprietary and from other manufacturers such as Zymo Research Corporation, allow for room temperature transport of samples stabilizing nucleic acids for better yield and performance in the laboratory.

7HG was launched under the leadership of seasoned logistics professionals and serial entrepreneurs.  We are founded to establish and provide a superior transportation alternative to shipper customers. This starts with the most basic and timeless cornerstones of transportation logistics, which includes safety, on-time pickup (OTP), on-time delivery (OTD) and freight visibility. This process culminates into a company rich in innovation, imaginative technology, and committed to a level of service second to none.  We facilitate the process by utilizing our proprietary platform combined with the latest advances to introduce real-time seamless connectivity, process automation and optimization.

ProChile is the institution of the Ministry of Foreign Affairs of Chile in charge of promoting exports of products and services. The Chilean agency contributes to the dissemination of foreign investment opportunities and tourism promotion. Also, has a network of over 50 offices worldwide and 15 Export Centers in Chile which have experience and tools to help boost the export sector and position Chile’s attributes in international markets.