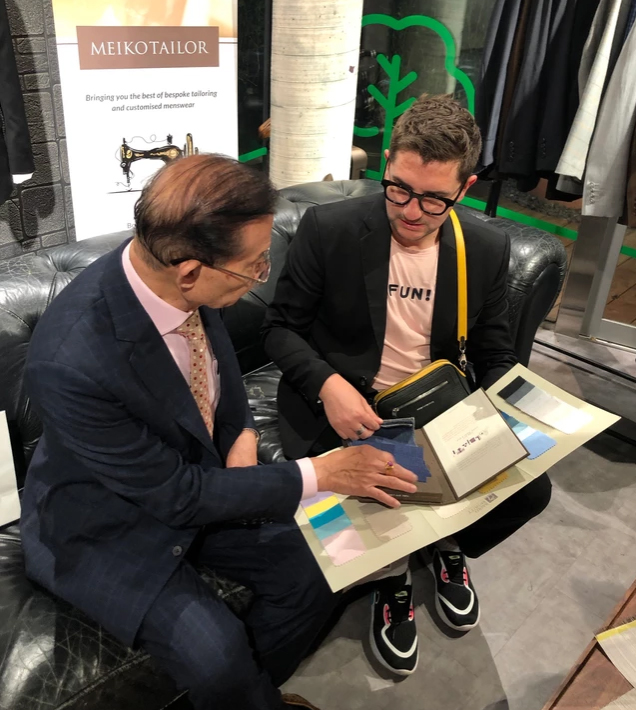 (YorkPedia Editorial):- Singapore, Jul 8, 2020 (Issuewire.com) – With a trusted bespoke menswear business spanning over four decades, Meiko Tailor stays at the top of the game by knowing what it takes to get there: quality workmanship and a fine selection of fabrics — some of which are only offered by them.

There is a material so luxuriously soft, which is called the “Fibre of Gods”. This material originates from the vicuña — a South American animal that is a distant relative of the llama. Vicuñas produce a golden fleece that is almost mythically fine and able to retain heat. This fabric is said to be so prized that only Inca royalty were allowed to wear it, back in the days.

Sadly, by the 1960s, poaching and over-farming had decimated the mountainous doe-eyed animals to near-extinction. That was, until luxury Italian fashion house, Loro Piana, spearheaded a conservation effort, which has since revived the vicuña population. Today, this rare, coveted wool reigns supreme as the Birkin of the textile world.

In Singapore, only three dressmaking houses have access to vicuña wool from Loro Piana — one of them being Meiko Tailor.

With its humble beginning at a shophouse in Geylang, today Meiko Tailor has stood the test of time to become one of Singapore’s most renowned names in bespoke menswear. The bespoke dressmaking house was founded by Master Chung Chi Kwong back in the 1970s. It is here at his atelier at the Pan Pacific Hotel that he runs a hand across a sample of vicuña wool. Demonstrating its sheer opulence.

“This fabric is so fine — finer than cashmere,” he says.

In addition to the fabrics from Loro Piana, Meiko Tailor also stocks other high-end material from top European mills such as Solbiati and Ermenegildo Zegna from Italy as well as Holland & Sherry and Savile Row from London.

Despite the rise of ready-to-wear department store suits that are always cheaper and trendier, Meiko Tailor, as one of Singapore’s oldest tailors has managed to find a niche providing craftsmanship and customisation. Master Chung, 70, meshes the timeless skill of hand cutting and sewing with styles that are in vogue, such as tapered fit jackets and trimmings on shirt collars. As you witness how Master Chung listens to his clients and carefully offers professional consultation on what he thinks suits them best — fabric or cut-wise — you will realise that the only true chic is quality. And in this field, Master Chung knows best.

Everything is done in-house at Meiko Tailor. There is no such thing as outsourcing or, God forbid, mass-produced bespoke apparels. Master Chung, who started his dressmaking journey as an apprentice at age 16, still personally cuts the fabric for each suit ordered — four decades after starting out on his own.

A perfectionist in his field of expertise, It doesn’t take long for Master Chung to reveal his secret.

“A well-made suit comes first from the cutting,” he explains, “it is also crucial to make sure the material does not twist during the sewing process so that the outfit drapes naturally. Each suit is finished off by the same sewer from stitching to buttoning,” he adds.

Master Chung is also a firm believer in full-canvassed suits as opposed to half-canvassed or even fused suits. He explains that men’s suits are typically made with a layer of horsehair canvas stitched to the outer wool fabric. The canvas helps keep the shape of the suit and prevents it from sagging. Half-canvassed jackets have canvas sewn through the chest and lapels with the remainder fused. With fused suits, the canvas lining is glued onto the fabric.

The reason why Meiko Tailor only makes only full-canvassed suits is that they hang better and are more breathable. There is also no bubbling or puckering after dry cleaning, which often occurs with fused coats, as the glue degrades over time and detaches from the fused backing — causing the fabric to ripple.

Keeping up with the times

Although Meiko Tailor has established a name for itself, having garnered a vast network of clientele both locally and internationally, Master Chung isn’t about to rest on his laurels.

“You have to keep up with trends,” says the veteran tailor, “young men these days prefer a fitted cut, which is known as an Italian style, as opposed to the looser style of the past.”

Master Chung also noted that instead of using plain cotton fabric, the preference today is for shirting material that has some texture and design. In addition to that, more and more men nowadays prefer their shirts not to have pockets. He added that more and more men are leaning towards trimmings on shirt collars and cuffs to help them stand out. Also, with casual dressing in vogue, more men are opting for smart-casual blazers that they can pair with jeans or corduroy pants.

Over the years, Meiko Tailor has grown by word of mouth, with customers returning for Master Chung’s impeccable craftsmanship, earnest service and artisanal touch. In 1986, Meiko Tailor opened its flagship store at the Pan Pacific — becoming one of its first tenants. In 2016, it set up shop at Asia Square Tower to tap the office crowd.

Today, 80% of Meiko Tailor’s clients are regulars, with two-thirds made up of expatriates or clients based overseas. It is also serving its second generation of customers, with some bringing their sons to get their clothes tailored by the Master himself.

Tapping into the fresh millennial market, Meiko Tailor has brought the next generation into the trade, with Master Chung’s 42-year-old daughter, Adele as its marketing and HR director. Of course, it also helps that Adele is also a certified image and colour consultant.

“There is still a market for bespoke, as people want something different from off-the-shelf,” Adele says.

“At Meiko Tailor, we offer a personalised experience that you don’t get with e-commerce or off-the-rack,” she adds. That, plus an array of premium fabrics, including the luxurious fleece sourced from the Andes that you don’t get anywhere else.

Meiko Tailor
Meiko Tailor is Singapore’s homegrown bespoke tailor with over 50 years of experience in bespoke tailoring. Over the years, we have developed our house-style in suits-crafting, pants and shirt-making, in particular, our bespoke suit. Every piece of tailored suit is the culmination of hours of handwork from start to finish by our team of experienced craftsmen trained by Master Tailor Chung.
7 Raffles Boulevard, Pan Pacific Singapore Unit 02-01