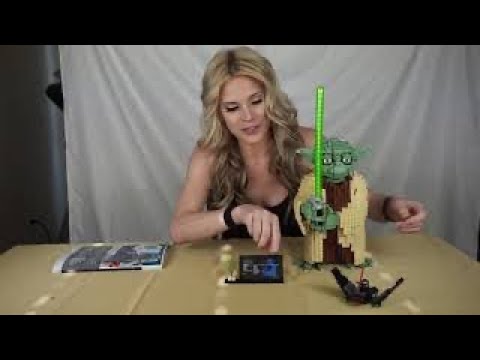 Latest YouTube video of the renowned influencer Tisha Vaculin is a fun-filled video that has caught attention of everyone. ‘Lego Yoda’video is a must for Yoda fans.

(YorkPedia Editorial):- California City, Jul 27, 2020 (Issuewire.com) – Yoda is one of the most renowned characters of Star Wars and when its fame gets fused with that of the Lego, then the fans can expect some fun time. This has been brought to the mass with the help of the latest YouTube video of Tisha Vaculin. The famous influencer cum actress has released her new video in which she is seen arranging the fragments of the Lego version of Yoda. She showcases her Lego-making skills through the video, which the fans of both Yoda and Lego have showered with love and praise. The ‘Lego Yoda‘ is surely a treat for those fans. The children will find it extremely entertaining while the fans of the film will be able to relive their memories.

Her son has also helped in the construction of the Lego structure, which has certainly accelerated the entire process. It took them almost 7 hours to complete the structure, reflecting the difficulty level of the toy. ‘Lego Yoda’ is not only for children but for all those Star Wars enthusiasts or fans, which has perfectly portrayed by the actress. She has been consistently drawing the attention of many with her videos on the platform, which has turned the heads of many and made them her fans. This six-minute and sixteen-seconds long video is truly a delight for those who love such videos and are dedicated to constructing their own Legos. Not only this but all of her videos are pretty fun to watch and informative for her avid followers.

Her videos like ‘How to make money online’, ‘Byte (Vine Reloaded)’, and ‘My Birthday Vlog’ have garnered the attention of one and all, due to her fascinating skills and artistic mind. You can feel her efforts behind the videos and how hard she works for the sake of her followers. This new video is dedicated to those followers of her who have been consistent fans of Yoda as well as Lego. Tisha Vaculin is truly a name that has earned recognition through this platform and reached the hearts of the audiences. You can view more videos from her by subscribing to her YouTube channel and also by following her on Instagram.