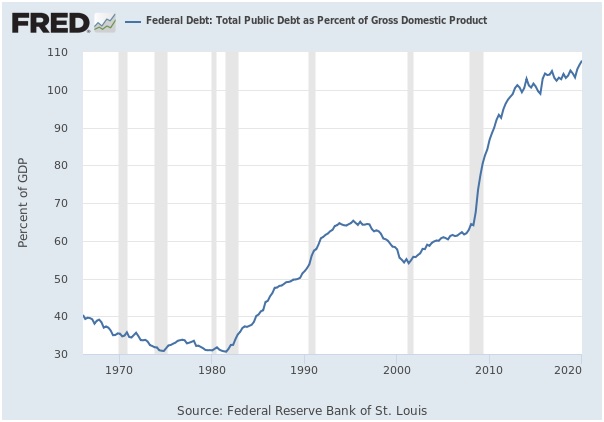 The United States is spending itself into financial ruin, unlike the economy following WWII, in which the U.S. had a strong manufacturing industry sector and a positive trade benefit, the US. has a weak manufacturing sector and a negative trade deficit. The interest on the National Debt will soon be fifteen percent of the federal budget. which will curtail any improvement of the nation’s infrastructure.

Borrowing money to pay for our government functions, without any plan to repay the debts, is just puffing up the economy and passing the debt onto future generations. There have been many articles pointing to the fact this generation is leaving less to the next generation, but no one recognizes the fact this generation is leaving a larger debt to future generations. The quality of our life has seen the effect of the debt, it has moved from number one in the world to thirteenth, and will continue to decline. Our children, Grand Children, and Great Grandchildren’s futures are dismal.