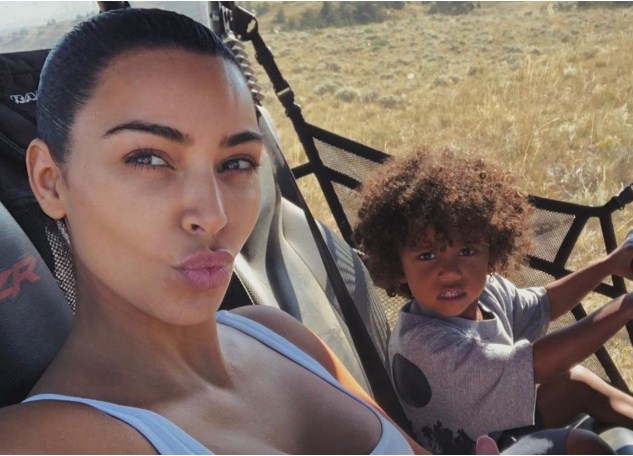 Kim Kardashian has once again gained the attention of her fans after her glamorous appearance at Paris Fashion Week with her latest Instagram post of her and son Saint West on a buggy in their Wyoming Ranch. Saint West Is Adorable In A Buggy With Mom Kim Kardashian and looks like they are having the time of their life. Saint is more inclined to resemble his father Kanye while their daughter Chicago “Chi Chi” West is a twin diva of her mother. Even though Saint is always seen as very enthusiastic about being on camera and dancing blissfully on video of Kanye’s Sunday service, he seems to have a solemn expression, while mom Kim has more of a relaxed look with her lips puckered in a kiss and a peace sign.

Kim and Kanye have bought the grand 4,500 acre Wyoming Ranch recently in 2019. It was confirmed that Kanye has built a music studio on the property along with a restaurant and plenty of room for outdoor activities. This music room is of great significance as this is where Kanye had created his masterpiece album Jesus is Born.

Kim has been sharing quite a lot of photos of her with the children at the ranch on Instagram and her other social media handles since they bought it and winning the hearts of her 161.5 million followers.

This weekend the 39-year-old mother of three has shared a photo of her from high school days that has her fans go gaga over it as they started putting Chicago West’s photo side by side and comparing the resemblance of the mother and daughter duo. It is quite obvious that the two-year-old takes after more on her mother than her father.

Her two sons though resemble their father but it is too early to say about Psalm West as he is only eight months old.

The side by side photo of the mother and daughter is available on the internet and now it is up to the eyes of the beholder to decide how much they resemble each other.