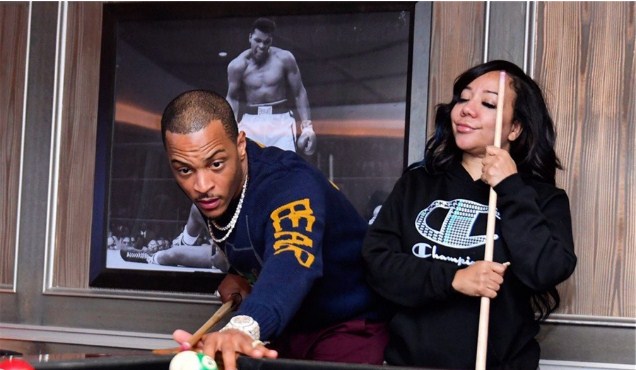 T.I. and his wife, Tiny Harris are with each other for a long time and it could not get any better, just then their little skirmishes and squabbles came into light over their relationship. They make an excellent couple together and it was evident to their friends quite clearly but many things have been going on underneath this beautiful love story. Recently it came out that Tiny Harris And Husband T.I. Have Lovers’ Squabble.

In a recent interview, Tiny revealed her insight about her relationship and her expectations from her love life- from past to present situations that helped her with her self-realization about what she actually needs and admits that security surpasses love in case of a marriage or even a relationship. Love comes second when she thinks of having a life partner and she is happy that she finally realizes what she was looking for this entire time.

She expressed her feelings and said that it was all about love back in those days because that time they had a lot of things to argue about. Even her parents used to fight with each other against racial issues. The 60s was a difficult time with a lot ongoing and so her parents also forged their relationships through many difficulties and disagreements. Her father was even harassed and arrested because he was with a white woman and many more incidents like that. But now things have turned differently.

Tiny added more as she has to say more about her ideal relationship, telling that she still remembers what Aunt Joyce, Kandi’s momma, said one to her when she was just around 15 or 16 that she should not marry a man for love but for security. She did not understand that fact back then but after all these years of experience, she finally understands that it is what she should seek.

T.I. posted a video of his recent radio interview where he is seen sharing some love tips from his personal experience. He replied to Tiny’s comments and said it will be too boring for anyone. According to him, no woman wants a man who is not desired by other women. You only want those who are desirable because that will be special.

He added more saying that a relationship with your man will only work if you don’t know that nobody wants him. It is pure psychology that if you want a man then only you feel to be with him and want to feel like he could be with anyone else right now but chooses to stay with only you. That will keep the interest up and that’s what everyone wants by the end of the day.

T.I. and Tiny have been married together for several years now and they have stuck by each other in their high and lows. They have been in love with each other that they know what they actually want from each other and that’s what they try to bring to the table for each other.

Tiny mentions that angel of her life, that someone who set her on the right path of life and acknowledged her with the importance of having a stable relationship to have a better life with stability, which is even more important just love.

She has grown from experience through all these years and she is finally happy now with her decision to marry her love, the rapper ,T.I. as they share the same sentiments and philosophy about life and love. They have our best wishes to prosper in their marriage and have a happy life together.