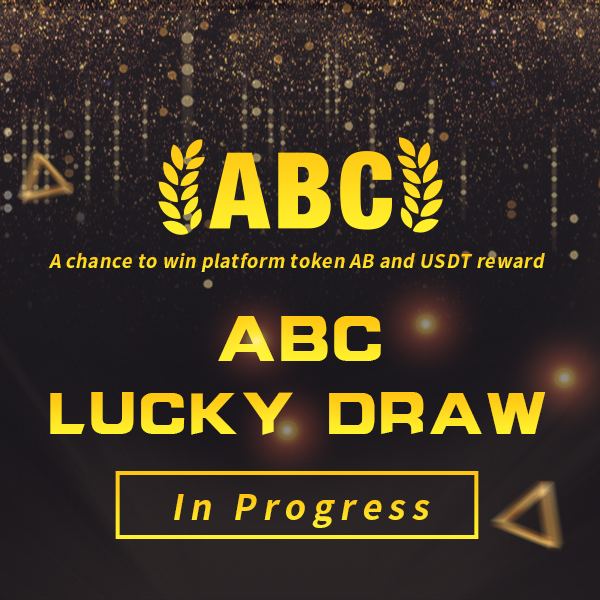 According to ABIT Exchange official data, the ABC Lucky Draw held by ABIT Exchange (new generation cryptocurrency exchange) has taken off and obtained a promising beginning. Since the start time on 4 May 2020 (GMT + 8), within merely 2 days, all the issued tickets, with a total number of 10,000, have been completely sold out through the ABIT Super Node Distribution channels, the fast speed even stirred widespread complaints among blockchain investors for the scarcity of ABC Lucky Draw tickets.

ABIT Token (AB) is the official platform token of ABIT Exchange, and the only way to obtain AB is by participating in ABC Lucky Draw. The ticket to the lucky draw is ABCash(ABC). Each ABC stands for one opportunity to participate. Once applying with 1 ABC, the participant will get 1 ticket number to join the ABC Lucky Draw.

ABIT Exchange organized 4 phases of ABC lucky draw. Each phase has 4 rounds of the lottery, and each round of lottery will randomly decide which tickets can win. There is no upper limit for the number of winning tickets for one single account. By winning different rounds of the lottery, participants can earn a substantial bonus of AB, USDT, or both. Non-winning participants can still receive AB at a fixed exchange rate in the end. The policy guarantees every participant will at least obtain what has been paid for and has chances to win huge prizes. Throughout the 4 phases, a total prize pool values 16,200,000 USDT will be distributed. According to ABIT public announcement, the warm-up start dates for the four draws are 20 April, 1 May, 11 May and 15 May.

The reason behind the fast sold out, in addition to ABIT’s comprehensive operational deployment, is that the market holds high estimates and expectations of AB’s value.

Admittedly, a reliable exchange provides the necessary value support and market confidence for the platform token. ABIT Exchange is a Digital Asset Exchange headquartered in Sydney, Australia and approved by AUSTRAC. As an emerging exchange, ABIT launched the Beta version in October 2019, publicly tested functions including spot trading, C2C fiat trading and admin panel. Entering 2020, 1.0 version of IEO section has been, and soon achieved more than 100,000 users from 84 different countries or regions and more than 50% of them have completed KYC verification; more than 30 promising projects have been listed or arranged their global IEO on ABIT.com.

As the only official platform token of ABIT, AB is an ERC20 standard decentralized token based on Ethereum network. The total supply is 350,000,000 and will never offer additional issuing.

ABIT Exchange has a clear development plan for AB in both the use-value and the holding value. According to the ABIT principle: “Basically, all the 2B functions rely heavily on AB token. Whether our clients of the Derivatives Cloud, White Label Exchanges, OTC Cloud etc., all need to use AB as payment method. Currently, for the upcoming ABIT Could services, we have pre-signed 20 global partners, and it is estimated the number will be 40-50 in Q2 2020, which shows the rigid demand for AB from the market.”

Besides, according to the official information, ABIT Exchange will use 30% of transaction fee revenue and 10% of other platform revenue to buy back and burn AB. “Another stimulation to increase AB’s value is the deflation model that we designed in the token economy. Our overall operating ideas is to continuously motivate users to hold tokens by creating reasons for them. When platform users really get benefits and gains by holding tokens, and when the platform is developing positively, the value of AB will naturally climb to a large extend. It is a virtuous cycle”