Sustainable travel is becoming the new norm as luxury travelers seek to reduce their footprint and make conscious and discerning choices.

While the world takes a breath, and the armchair traveler seeks to satisfy their wanderlust while in lockdown, this is a great time to think about what travel is doing to the planet. This is what Eco-Luxury travel expert and global brand ambassador Richard Crawford embarked on before the lockdowns began as he wondered about what his constant travel was doing to the planet.

Sustainability and making a conscious effort to reduce our environmental footprint in travel is no longer an option but a must. For the discerning luxury traveler who still seeks adventure and incredible experiences, but be eco-friendly; where can they turn to find out where to deliberately go to satisfy their wanderlust but leave minimal impact on the planet?

Richard Crawford is a seasoned expert in Eco-Luxury travel and a global luxury brand ambassador. He has worked in the luxury industry for over 10 years of building relationships with global brand leaders, developing partnerships with publications, and telling brand stories. Richard has worked with multinational luxury brands including Ritz-Carlton Hotels, Kempinski Hotels, Lalique, and Glenlivet.

Richard Crawford travels the world with a film crew in tow, delivering his extraordinary experiences as an Eco-Luxury traveler. He is a sensory messenger and storyteller.

For the viewer, he is your eyes, ears, and taste buds, thoroughly savoring while discussing, learning, and exploring each location gaining insights into their initiatives to reduce their impact on the planet while still providing an exceptional guest experience.

Crawford rates each property after also gaining his insights with staff and management and in a show that is informative, entertaining, engaging, and beautifully shot, showcasing the unique character of each location.

As a globetrotter and luxury brand expert Crawford understands the needs, wants, and desires of luxury travelers and delivers his discoveries with his stylish presenting skills – a unique blend of charisma, casual elegance, authenticity, genuine enthusiasm, sensibility and love for great luxury travel experiences. His passion for Eco-Luxury travel and great food is infectious as is the cadence of his voice and storytelling abilities that deeply resonate and makes you feel like you are right there with him in each incredible location.

LEAVE NO TRACE – Streaming now on Amazon Prime Video – 3 episodes, a total of 10 being released. The Amazon subscriber base of the territories in which the show is aired, is over 125 Million, (112 Million in the USA).

About the Eco-Luxury Travel Show – Leave No Trace

Richard Crawford is available for remote magazine, newspaper, radio, TV and podcast interviews and for brand collaborations. Crawford is based in New York City.

To book Richard Crawford and for creative assets and additional information

A native Scotsman, Richard Crawford grew up with an innate respect for heritage and appreciation for tradition. As a child, he became increasingly interested in culture and history, and could often be found at the local airport in Paisley where he would sit for hours, fascinated by the travelers, captivated by their sophistication, and curious about their backgrounds. As an adult, Crawford relishes the opportunity to travel and experience the world firsthand, and never misses an opportunity to share his stories of adventures with others.

In 2005, Crawford became the United States Ambassador to The Glenlivet Single Malt Scotch Whisky, and his dream became a career.  As the spokesperson for this iconic brand, Crawford embraced his role as seanchaidh, (pronounced shan-chee, a traditional Gaelic word meaning ‘storyteller’) by traveling the country, introducing The Glenlivet – not only as a brand, but also as part of a complete lifestyle – to his audience. During his time as a Scotch whisky ambassador, he learned an appreciation for the finer things in life and he continues to work with brands he has a true respect for.

Since 2012, Crawford has travelled the world producing video programs and writing articles for publications that focus on luxury travel and unique experiences.  Whether profiling an exclusive private island resort in the Maldives, staying in an elaborate treehouse in a Swedish forest, or skiing a glacier in Chile, Crawford brings his unique presenting style to every project.

Crawford has appeared on many TV and radio shows including Fox News Network, CW11 New York, BBC America, Bloomberg, The Street.com, as well as many magazines and trade publications including GQ, Esquire and WhiskyLife Magazine.  In 2009 Crawford was awarded “The Certificate for Outstanding Contribution” by the James Beard Foundation.

Passionate about the health of our planet and modern social issues Crawford was encouraged by the efforts of many of the luxury brands towards eco-tourism, sustainability and social responsibility.  So much so that Crawford deemed it important to retell their stories with authenticity, credibility, charisma and charm. He builds an emotional connection with his audience, ultimately transforming these luxury brands into an enriched experience of life with a focus on environmental stewardship.

About the Director Ben Alcott

Ben Alcott began working in the television industry in 1988, and he has been producing unique content ever since. Ben’s career in television began early – his grandparents owned one of only two private zoos in New South Wales, Australia, so every time a TV program needed a monkey, or an emu, or a kangaroo, the Alcotts would get a call.  Sometimes these programs needed a young actor too, and so Ben was put in front of the camera.  From the age of 4 Ben could be seen on Australian children’s program Play School; at 7, he was in Australian film Around the World with Dot, second in the famous “Dot” series of films.At the age of 14, Ben began his own video production company Blacksheep Productions, which grew over 20 years to have offices in 3 countries and more than 50 full time staff.

Whilst touring with Robbie Williams “The Eagle Has Landed” Tour in 2001, Ben received a call asking him to work with up and coming celebrity chef Jamie Oliver (whom he’d never heard of).  Taking a gamble he agreed, and the two very quickly hit it off.  This began a career in food television that has lasted over 15 years.  Ben has worked with a who’s who of the world’s top food talent – Gordon Ramsay, Rick Stein, James Martin, Hairy Bikers, Eric Lanlard, Curtis Stone, Jason Roberts, Ben O’Donoghue, Kylie Kwong, Bill Grainger, Matt Moran, Luke Mangan, Rachel Ray, Bobby Flay, Giada Di Laurentiis, Michael Symonds, Alton Brown, Duff Goldman, Buddy Valastro… there is barely a celebrity chef that hasn’t worked with Ben at some point of another.  He was also asked to create My Kitchen Rules Live for the Seven Network Australia, and has directed MasterChef Live in Australia, UK, and Ireland.

Ben was nominated as Young Australian of the Year 3 times, and he served on the Australia Day Council’s Youth Committee for a number of years.  He has been featured in a number of newspaper and magazine publications (such as Money Magazine and GQ), and he was selected as one of Cosmopolitan Magazine’s Top 30 Australians Under 30.

Ben and Richard have been working together making video programming for the past 4 years, and have travelled the world together a number of times.  Their natural chemistry ensures content that is fun and interesting, whilst their respective experience combines to create unique television.

Damn Good Productions is a production company with experience across a vast range of projects and programming. Founded in 2009, Damn Good has offices in Sydney, Melbourne, London, and New York City.  Projects have included shows on helicopter rescues on Mt Everest, “money can’t buy” luxury experiences, showgirls in Las Vegas, post-baby weight loss, an eccentric pair of brothers running a German restaurant, and kids cookery – just to name a few.  The company also created the first ever-Australian commission by MTV Networks – the successful “Freshwater Blue”. With in-house production and post-production facilities, Damn Good is well placed to produce content for distribution across a range of platforms. 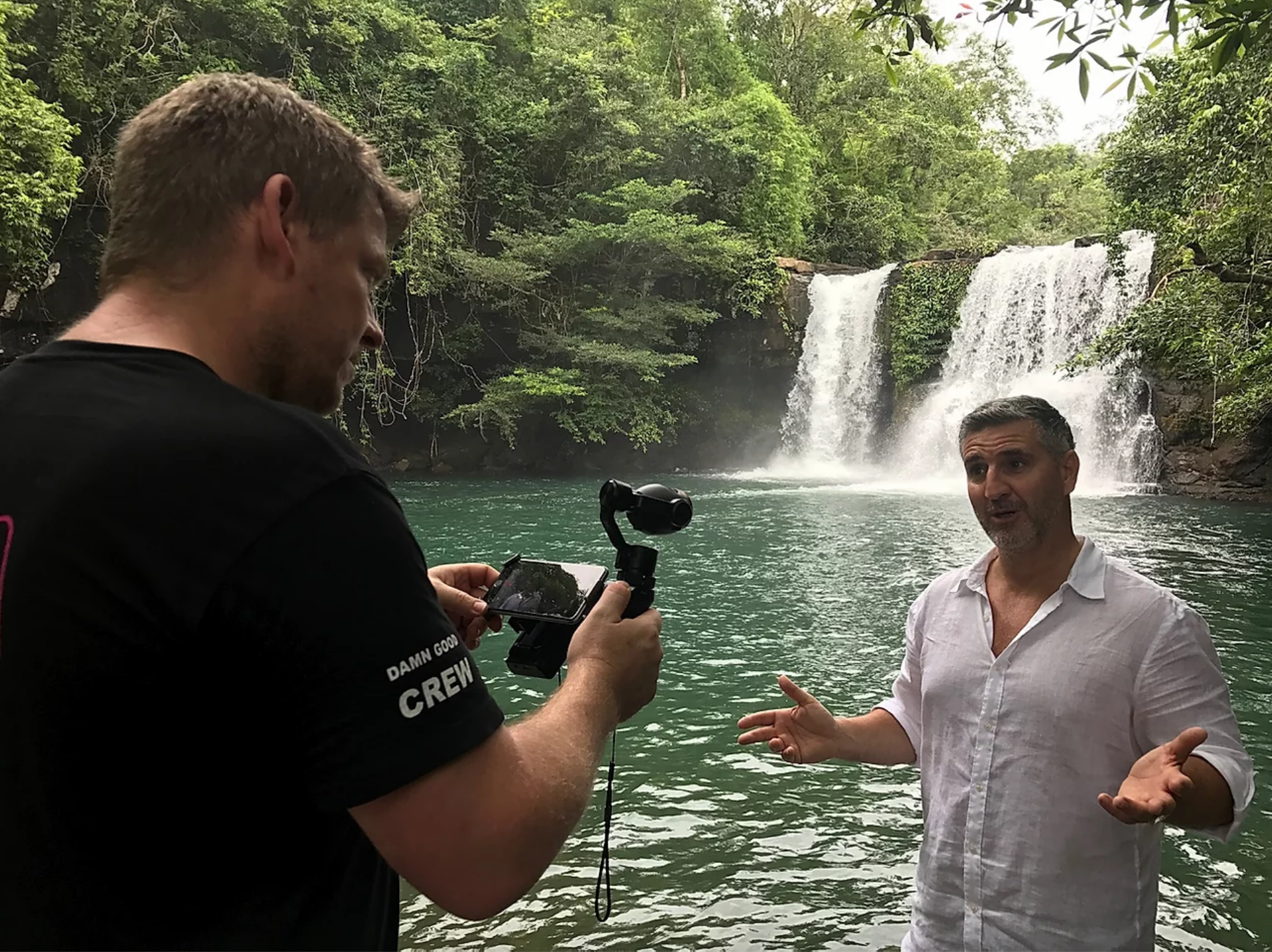