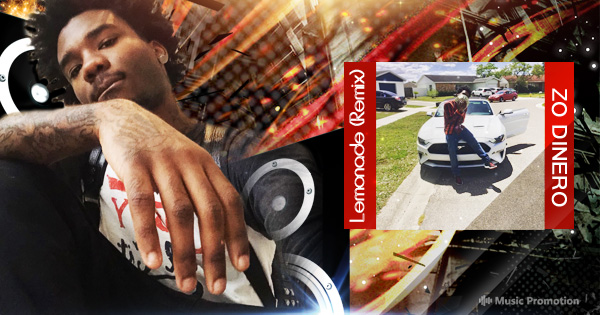 Zo Dinero shows off his fast rap skill with a refined flair of storytelling in his latest soundtrack that holds as a testament to his unbound potentiality. He can walk effortlessly between fun and playful chants to effective lyricism that deeply laments his name in the hip-hop industry. His freestyle flow is breathtaking as he raps over the catchy production that swiftly breezes past the listener’s ears with groovy harmonies. The Tampa rap artist has an unconventional way of delivering the verses that meticulously move from sounding hard to something fully intriguing. On his latest track, the artist’s voice totters between trap and real rap, but sounds smooth throughout, showing his grasp over the genre.

Zo Dinero typically shows off his artistic flexibility in his track ‘Lemonade (Remix)’ that also proves that the artist has perfected the art of flawless hardcore rapping. The song completely upholds his natural gift of rapping and he performs with immense confidence to take over the stirring in his own hands. The song comes from his label Octiive and starts with the flow of some intriguing musical elements that are soon taken over by the artist’s steady rap voice. The first part of the track includes electronic music that makes the listeners anticipate his fast-mouthed delivery.

The artist’s clever wordplay continues thereafter as he uses a versatile set of rhythm flows as a foundation to build up his song structure and dives into the details. He is an artist armed with an intoxicating control over his voice and this is perhaps the most remarkable thing about his artistry that hooks the audience to his soundscapes. Zo Dinero is currently on his upcoming project titled Bipolar and has pulled his inspiration from Soulja Boy and Agoff to compose such magnetic soundtracks. Listen to the track on Soundcloud and for more information follow the artist on Twitter, Facebook and Instagram.

Listen to this song ‘Lemonade (Remix)’ on SoundCloud :