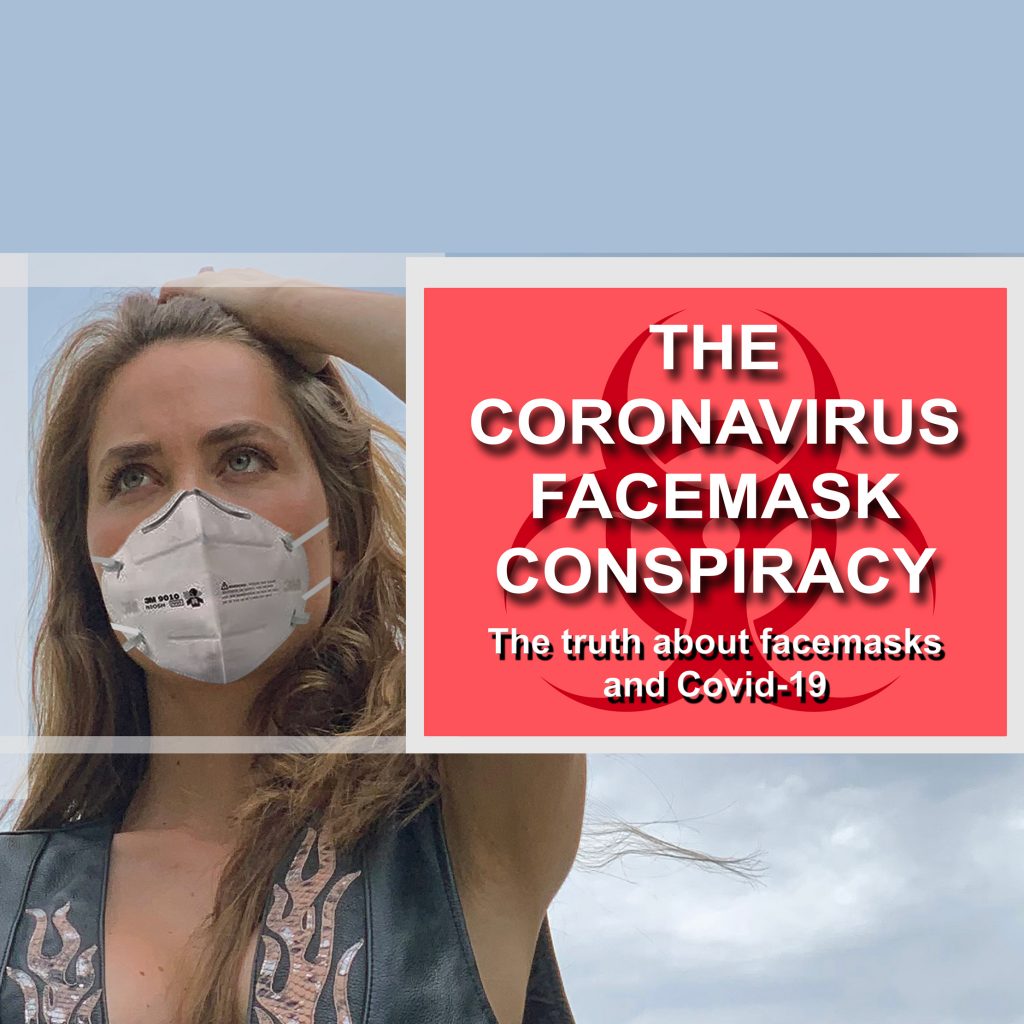 Tourists from Asia donning facemasks may once have been the butt of jokes, but now it seems that they’ve known something all along that most of us still don’t.

If you’re like most people in the West, your government has recommended against wearing facemasks in response to the Covid-19 pandemic.

Time reported that “[d]octors and health experts keep spreading the word. ‘Seriously people- STOP BUYING MASKS!’ tweeted Dr. Jerome Adams, the U.S. Surgeon General…’They are NOT effective in preventing general public from catching #Coronavirus, but if healthcare providers can’t get them to care for sick patients, it puts them and our communities at risk!’”2

In a Fox & Friends interview, Adams actually argued that wearing a mask can even increase your risk of getting the virus. “Folks who don’t know how to wear them properly tend to touch their faces a lot and actually can increase the spread of coronavirus.”2

Mainstream news outlets like CBS simply blindly repeated the tenor of this message.3 So it’s no wonder that every person polled for this article was under the impression that “face masks don’t work” based on what they’ve repeatedly heard in the media.

And yet, buried within their online materials, the CDC and the FDA openly admit that facemasks are a primary line of defense in reducing exposure to the coronavirus, and that an N95 respirator blocks at least 95 percent of airborne transmissions of the virus.1

Studies have shown that N95 respirator masks offer a fivefold protection against pathogens like the coronavirus, which is why the CDC recommends that health care workers wear them when there’s a risk of exposure: “N95 respirators are the Personal Protective Equipment most often used to control exposures to infections transmitted via the airborne route.”4

In its fact-checking article intended to dispel the widely-held belief that “face masks don’t work”, The Guardian emphasized that “masks are effective at capturing droplets, a main transmission route of coronavirus, and some studies have estimated a roughly fivefold protection.”5

According to the FDA, even less effective barriers like surgical masks (and so, arguably, bandanas and other conventional mouth coverings) can still offer protection for both the wearer and those they come in contact with:

“If worn properly, a surgical mask is meant to help block large-particle droplets, splashes, sprays, or splatter that may contain germs (viruses and bacteria), keeping it from reaching your mouth and nose. Surgical masks may also help reduce exposure of your saliva and respiratory secretions to others.”1

Our health care establishment’s marginalization of facemasks as an effective line of defense for the general population stands in sharp contrast to China’s requirement that citizens wear facemasks in public, which virtually everyone in Beijing is complying with.6

A NY Times Op Ed recently noted that “[p]laces like Hong Kong and Taiwan that jumped to action early with social distancing and universal mask wearing have the pandemic under much greater control, despite having significant travel from mainland China.”7

So why would public health authorities responsible for the population’s safety recommend against a proven, highly effective measure against the spread of the pandemic?

Why have they been downplaying the effectiveness of facemasks in protecting the public from the spread of Covid-19?

And why have most people been misled by the media into thinking that “face masks don’t work”?

The reason stated by the CDC is that “facemasks may be in short supply and they should be saved for caregivers.”8

This resulted in a handful of news sources finally addressing the issue. Such asThe Boston Globe’s article “Guidance against wearing masks for the coronavirus is wrong – you should cover your face”.9

Current strategies to address facemask shortages center around controlling the existing supply and prioritizing its delivery to health care providers, not on increasing the supply and widening its distribution to the general public.10

Releasing the supply of expired stockpiled N95 facemasks from as far back as 2003 is another stopgap measure considered by the CDC. Yet the numbers show that these solutions will not nearly be adequate in addressing the current pandemic.12

According to Bloomberg, the US only has 1 per cent of the 3.5 billion masks it would need to address a serious Covid-19 outbreak. And as the crisis worsens, N95 masks will become even more scarce.13

Many governments have begun controlling their supply and restricting their sale—Germany recently joined South Korea and Russia in banning exports of medical masks.9 This has also raised concerns that poorer countries will be left without a supply, further fueling the global epidemic.

While saving limited supplies of N95-compliant face masks for healthcare professionals may sound like a prudent course of action, the real question is: why aren’t our considerable resources being shifted to mass produce an inexpensive device that can stop 95% of airborne transmissions (and save thousands of lives and billions of dollars in the process)?

Even Chinese billionaire, Alibaba co-founder Jack Ma, is doing his part by donating six million masks to countries around the world, including 500,000 to the US. So why isn’t our government also stepping up to the plate?

China’s response to their own facemask shortage serves as a good example of what can be accomplished given the necessary political will and prioritization of resources. It also exposes the US’s and the West’s over-reliance on China’s manufacturing base.

Within weeks of the crisis, and as part of a massive industrial drive, Chinese government incentives resulted in thousands of refitted pop-ups manufacturing masks and other protective equipment.

“More than 2,500 companies in China have reportedly started making masks, among them 700 technology companies including iPhone assembler Foxconn and smartphone makers Xiaomi and Oppo, in an extraordinary mobilisation of resources.”14

Significantly, China appears to have succeeded in tackling the main obstacle to ramping up their N95 facemask production; the supply of a key manufactured material—melt-blown non-woven fabric. Largely reliant on limited foreign supplies until now, Beijing has set up two production lines intended to make four tons of the fabric each day, which can then be used to produce 1.2 million N95 respirators a day.14

Before the outbreak, China already made about half the world’s supply of masks at a rate of 20 million units a day. That has now risen to 116 million. Commentators have compared this Herculean effort to the US’s massive industrial mobilization during WWII.14

In response to the facemask shortage, The World Medical Association cautioned that “this crisis should be a wake up call for politicians and societies to make the necessary investment in emergency preparedness and to look into the vulnerability of our supply chains”.14

Mask shortages have reignited the debate regarding an over-reliance on China and the failing of US industrial policy.

Yet wouldn’t prioritizing the manufacturing and distribution of masks be a better response than discouraging people from using them, or worse yet, misrepresenting their efficacy in stopping the pandemic?

While the US cannot replicate China’s centrally-controlled, state-owned enterprises ramping up a nationwide mask-making effort (with the country’s sprawling private manufacturing engine following suit), clearly the West’s massive economic and industrial resources, and its ability to implement creative solutions, have not even begun to be tapped into.

President Trump has invoked the emergency provisions of the Defense Production Act, which could allow the government to direct companies to alter production to address the domestic shortage of medical supplies including facemasks.15

The White House is also relying on an executive order to allow the government to buy overseas medical supplies in the hope that it will incentivize companies to manufacture them within the US.16

Yet these initiatives are sorely inadequate in addressing the crisis.

Even knowing all this background, something is still not adding up with the West’s healthcare establishment’s misrepresenting the efficacy, and discouraging the use of, an inexpensive, effective antiviral barrier during this crisis—exactly the sort of illogical and harmful policy that can lead to conspiracy theories.

As health care officials continue to recommend against the use of facemasks and downplay their effectiveness, they remain accountable for thousands of unnecessary illnesses and deaths.

Yet another casualty has been our trust in government and healthcare authorities.

In her Op Ed, “Why Telling People They Don’t Need Masks Backfired”, information science professor Zeynep Tufekci hit the nail on the head by arguing that healthcare authorities damaged their own credibility by misleadingly claiming that masks aren’t useful for healthy people, rather than being forthright about the need to conserve masks for health care providers in the face of a shortage.7

So how can you be a part of the solution?

• Share this article and spread the word about facemasks
• Wear them to protect yourself and your loved ones
• Demand that our politicians do what it takes to make more for everyone
• Demand that our media and healthcare establishment to stop misleading the public by telling us that they don’t work.