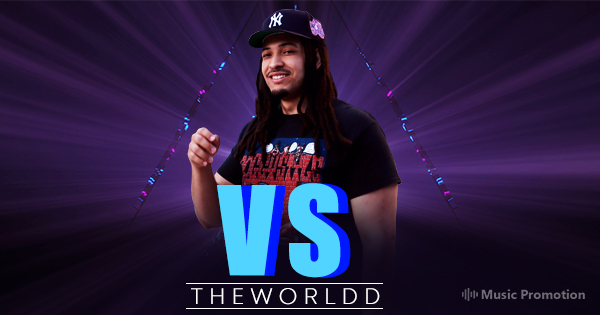 The versatile genre of hip hop has been adapting to newer and more complex rhythmic and rhyming styles since its birth changing its flow to different directions producing the most unique compositions. Well-known musical figure in the underground hip hop scene of New York City, prolific rapper VStheWORLDD is making headlines with his extremely unparalleled resonance that is bringing a new rebellious wave into the global music scene. Overcoming the difficulties of the current crisis with his sheer determination, the brave and hard-working artist has presented his followers with back to back hits featuring a stunning East Coast vibe.

Coming from a rough background, the South Bronx hip hop artist found solace in the warm embrace of music since he was very young. He became particularly interested in the genre of hip hop and rap due to the freedom of expression that it offers. His music tells the story of his hardships and how he overcame them establishing a balance between good and evil. The vivid picturization of the lyrical illustration of his songs depicted through the use of powerful metaphors and verbal imagery reveals his exceptional articulacy and brilliant songwriting skills. With vigorous practice and raw passion, he has become unmatchable when it comes to his inimitable pitching agility.

Driven by his thirst to create, the independent artist VStheWORLDD has been delivering high-quality music to his audience without an obligation to anyone. His most influential soundtracks ‘This Is It’, ‘CRAZY’, ‘Bully’, and ‘Unfortunate’ have widened his horizon gaining him fame and recognition all over the globe. He has finally released his EP Geist recently and plans to drop the music video for the last track of this EP, called ‘Worst Taste’ and other songs very soon. Follow him on Spotify, YouTube, Facebook, and Instagram and be updated about his upcoming releases.

To visit his SoundCloud profile, go through the link : https://soundcloud.com/vstheworldd