One name that has stood out amidst the deep smog of 2020 to make everyone spin their head to and fro with his shattering soundscapes is Forlorn Forest. With his explosive energy and alluring melodies, the Wisconsin death metal artist has proved his caliber to create some of the most influential sounds in heavy music’s history. The artist’s unique taste in death metal music has created a new milestone that only seems to be a dream of others to conquer. Inarguably, the music creator has created an irremovable mark in this highly challenging genre by delivering some fantastic sounds so far. 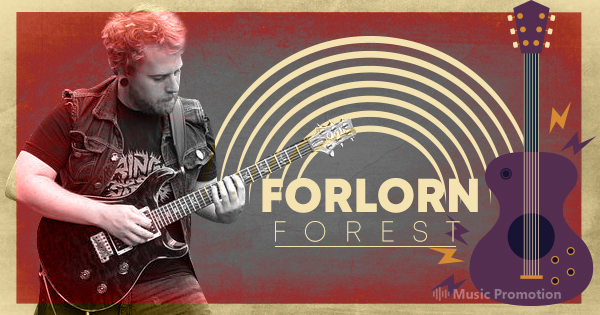 Songs like ‘Moonrise’, ‘Shackled By Celestial Lights’, ‘Nomophobia (Follow The Machines)’, and ‘Nearing The Hour’ outline the artist’s untouchable energy and passion for exotic sound creation. By blending the most hitting metal sounds to build his compositions, the independent artist adheres by no set rules and indulges in his free imagination to curate his tracks that can instantly uplift the mood of the listener. The heavy pounding nature of the songs driven by the consistent thumping of beats, electronic sounds, and pure raw energy is highly infectious and makes for a perfect listen on days where you need a little extra dosage of energy. The most cohesive form of death metal sound, the songs have defined the artist’s creative statement and how brutally the musician can fuse distinctive tunes at terrifying levels of precision and aggression.

Coming from Wisconsin, Forlorn Forest focuses on promoting all types of metal and uses his signature style to shape them most attractively. The sounds fluctuate through various highs and lows to strike the perfect chord and the artist’s pumping energy inspires others to pick up an instrument. Driving inspiration from At The Gates, Rings Of Saturn, DEATH, The Black Dahlia Murder, Powerglove, and Jason Richardson to create his hammering sound design, the artist is riding high on success with his artistry. Follow him on Facebook for details and hear out his banging music on YouTube now.

Soundcloud is a music streaming app where you can listen to his songs: https://soundcloud.com/user-136045798