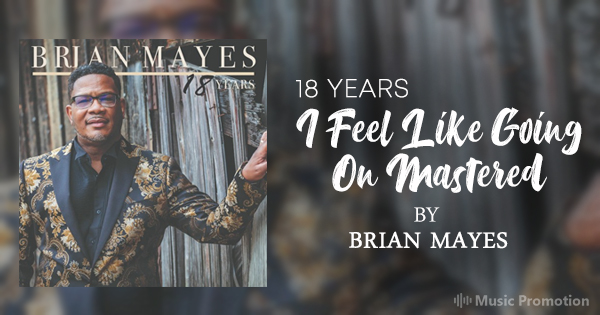 The outstanding resonance of traditional gospel music has taken a back seat with the contemporary style flourishing in the global music scene. Determined to bring back the lost glory of vintage gospel sound, well-seasoned musician Brian Mayes has introduced the world with the hypnotic melodic charm of the genre through his latest project 18 years. The first song of the project ‘I Feel Like Going On Mastered’ brings back the nostalgic flavor of the classic musical form with a twist of his unique cadence that can only be described as breathtaking.

Being surrounded by musical influences from his childhood, he always had a knack for everything musical. After school, he chose the United States Air Force, despite having a sure chance to go to college as he wanted to earn money to help his family. After air force, he decided to rejoin his mother’s gospel group with his brothers called The Mayes Brothers. Unimpressed by his brothers’ contemporary style of the genre, the Camden world music artist concentrated on the more traditional style and started his own group called Heavenbound and recorded his first song ‘It’s just the Holy Ghost’. Later he was joined by Reggie Funderburke and manager Kevin Cloud and renamed the group as Brian Mayes and Heavenbound.

The prolific musician has introduced his exceptional thematic vision after realizing that the allure of Quartet music was fading. Brian Mayes inspires the audience not to lose hope and keep trying in his recent release ‘I Feel Like Going On Mastered’ from the project 18 years that symbolizes the years he has been on stage. The addictive vocals interlaced with the mesmerizing instrumental rhythm create an atmosphere of pure joy and absolute perfection. He is currently working with the production house called Dinard Publishing hoping to establish a vast fan base with traditional gospel lovers.

Listen to his creations on Soundcloud now: https://soundcloud.com/user-230097204/i-feel-like-going-on-mastered