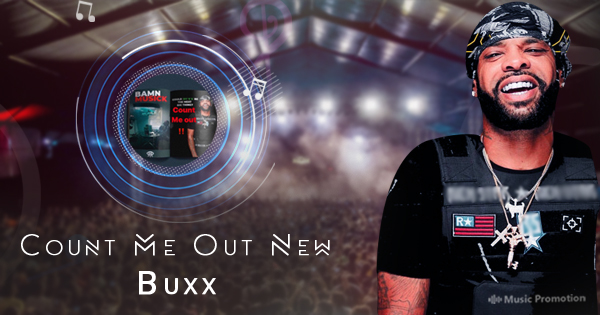 Buxx has time and again proven that he is one of the most flamboyant rappers around and with the song ‘Count Me Out New‘ he has put a stamp on it. According to his ardent fans who are glued to his songs, the St. Louis rapper has taken a step ahead in the genre of hip hop leaving his contemporaries far behind. On the personal front, he is a responsible man looking after his family and has got an unwavering passion for his kind of music. The struggles in life have left an indelible impression on his existence that reflects through his creation. He has charted out other songs like ‘What Yall Think‘, ‘New Jack‘ and ‘Rich Nigga Habit‘. To get an insight into the fantastic musician and a gem of a person, you can visit his profile on Instagram. You can find his songs on streaming platforms like SoundCloud for an amazing treat you do not want to forget.

In the song ‘Count Me Out New’ by Buxx there is an extraterrestrial realm that is created by the high-intensity vibes along with an exquisite melody in a heavy electronic backdrop. The fusion in the song blends the serenity of the melody along with a mumble in the rap giving it an organic feel. There is a quiet rasp about the song which has a minimalist approach and is evident in the vocal style of delivery.

Buxx has instilled the element of confidence in the song ‘Count Me Out New’ with a sway and a lot of swaggers. There is a touch of soft funk in the song which blossoms into the bigger array with all its class in the coolest way possible. The upbeat bounce in the song is profoundly uplifting which notably engages the audience. It is accompanied by a stunning performance.

Check out to listen this song ‘Count Me Out New’ on SoundCloud: