It is time to acknowledge the American prodigy Fly Boy Gang (FBG) in hip hop music that has been making unprecedented musical achievements through endless endeavors from the past few years. The New York hip-hop Trio releases a neoteric hip hop album ‘The Most Underrated’ that captures the best of the three young boys who have taken the pledge to stupefy the world with their musical feats. KingWes, Nick, and $hady formed this urban music band some years ago with no support and limitless passion and faith in each other. Now they are at the zenith of their popularity crossing the boundary of New York City, making them a famous entity of hip hop in front of the world. 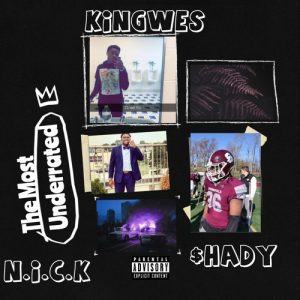 Being fun and composing funk is what made the boys of Fly Boy Gang (FBG) extraordinary at this age. They are the forebears who inspire this generation to live up to a life they have dreamt of despite its uncertainty. They came from nothing and now they got a hold of the whole world, people addressing their names to be their icons because the young trio had the belief in wonders. ‘The Most Underrated’ has interesting references in the rap verses of songs like ‘FBG The Anthem’ and ‘Tesla’ (Prod. Myst) that show off their brilliance and charisma.

KingWes, Nick, and $hady came together in it with the same flair and love for music. They have always wanted to do something they love and that motivated them to record outstanding hip hop tracks with cynical and snappy rap verses such as ‘Money Prod. KJ Run It Up’, and ‘Hockey’ (Prod. D Swish) that promise to help you roll a good time with the boys. They are working on upcoming tracks for the summer with the party coming up. For more interesting updates and great music, follow them on their socials.

Fly Boy Gang amazed everyone with their music on SoundCloud: https://soundcloud.com/ogwes